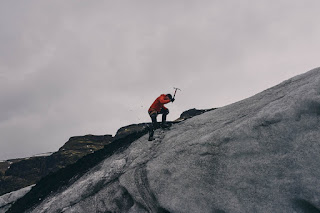 Mr Heroic Protagonist and his friend Mr Sensitive Companion stood together in awe at the foot of Mount Literature. Mr Companion was reverent, Mr Protagonist was eager. He stood, hands on hips and said:

“It’s going to be hard work” said Mr Companion, shyly. Protagonist had brought his friend along as a foil. He replied:

“I don't like work, no man does but I like what is in the work; the chance to find yourself, your own reality for yourself not for others.” That was why they were here. They were going to climb Mount Literature using only rope, pegs, helmets, crampons and quotes cobbled together from the vast Plains of the Internet. “Here’s what we will do” said Protagonist. He fetched a map. “If the weather holds we shall make our way here” he pointed, “to Exposition Plateau, where we shall make camp. Then we shall strike out for Plot Point Ridge up Denouement Face. Once over that we should easily make the summit.”

“So it goes” said Companion.

“Steady, Companion” said Protagonist. “We must save some quotes for the descent. Bring McGuffin and make haste while the Sun shines.”

Companion tugged on McGuffin’s reins and the donkey trudged into motion. They began their ascent up the winding paths of the foothills. Companion was not completely happy. “I’m worried about the climb” he said.

“If you have the guts to be yourself” said Protagonist, from over his shoulder “other people will pay your price.” 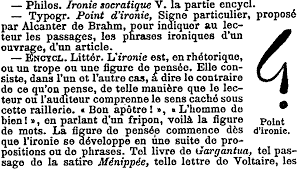 “That’s what I am worried about” said Companion. “I’ve left my Wife and Child behind, which adds to the peril. Also, I’m worried about some of the quotes we bought in the Global Village. The shopkeeper told me ‘you never know what worse luck your bad luck has saved you from.’ I wasn’t too pleased but he said ‘I am not bound to please thee with my answers.’”

But Protagonist wasn’t really listening. “You speak an infinite deal of nothing sometimes, Companion. Men of few words are the best men” he said, striding on. Companion stopped, with a sour expression:

“The smallest worm will turn, being trodden on.”

Protagonist turned to his friend. “Forgive me. I know not all that may be coming, but be it what it will, I'll go to it laughing.” He smiled and gave his friend a manly hug. Companion couldn’t stay mad at him. The only people for him were the mad ones. That’s why he followed Protagonist, despite his doubts.

The pair (plus McGuffin) made it to Exposition Plateau, safely across outcrops of metaphor and screes of accumulated symbolism. That evening, as the sun set they made camp, Companion said “I suppose I better ask you why we are making this trip.”

“It’s very simple” said Protagonist. “The Author needs our words and actions to bear out a heavy-handed metaphor.” Companion nodded. “Look over there” he pointed down below, “who’s that?”
“That’s Shakespeare” said Companion.

“Indeed it is” said Protagonist. “And who is that?” he asked, pointing to another figure.

“Correct” said Protagonist. “And who is that?”

“He is Greek” said Protagonist. “That's Homer” he added.

“Which one of them is furthest away?” asked Protagonist. Companion looked for a long time but he could not tell. “That’s the thing with digital data” said Protagonist, “it’s infinitely storable and infinitely repeatable. Data does not degrade. Memory cannot fade. Time is irrelevant, flattened across the Plains of the internet.”

“But why are we climbing Mount Literature?” asked Companion.

“To see what’s beyond, in the Valley of History” Protagonist pointed to the Internet, “we are spectators moving through Curated History. Over there” he nodded toward the summit, “where all the world’s a stage, we are history.”

“It sounds plausible enough tonight” said Companion “but wait until tomorrow. Wait for the common sense of the morning.”

At dawn the pair struck out for the peak, leaving poor McGuffin behind, tied to a rock. “Do we have enough quotes to last us?” Protagonist asked.

“A reasonable amount” said Companion. He knew it wasn't though. They'd talked too much on the way up and would struggle to get down at best. But Protagonist strode off all the same, still confident; all progress depends on the unreasonable man Companion figured.

The slopes soon got too steep for maps, too steep to walk. The pair put on crampons, took out their ropes, their hooks and their sturdiest quotes. Above them now was the peak but before that Plot Point Ridge. It's walls beneath were almost sheer, footholds few. Beneath the spur words were becoming inadequate. Even Protagonist seemed unsure. He glanced back at his friend, flush with fear, he exclaimed:

“Fight till the last gasp!”

But almost within arms-length of conquering the ridge his grip failed. His rope broke. Companion watched helpless as Protagonist tumbled. “I let go!” Lost in oblivion, borne back ceaselessly into the past.

Alone on the mountain now, Companion clung on. There was no way back except the way his friend had gone. Companion climbed. The walls fell away. Friction disappeared. Geometry was subverted. Companion could not tell up from down. Logic may be unshakeable but it cannot withstand a man determined to live. Without even knowing how he planted a first hand, then a second across the spur and hauled himself with what remained of his strength to safety.

After catching his breath and recovering some sanity Companion renewed. The rest of the climb was fairly simple. He reached the top of Mount Literature and gazed down on the far valley. He saw true time, not the curated version. It stretched back vast distances. He saw everything. The whole process of near-unbroken agony and pointlessness so that humans may one day know the price of everything and the value of nothing. He fell to his knees and gasped in horror:

“It is a great misfortune to be alone.”