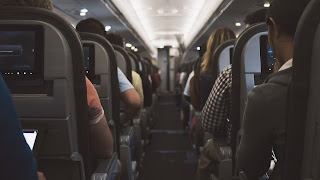 I'm a pilot. It's not a line of work you'd expect to see apparitions. The airline I used to work for though had a haunted 737. I have flown with the ghost, even seen it up close. It's a slim, small man, younger-looking with pale, cropped hair. He wears a cap and uniform with purple and gold epaulettes, hence his name, the Engineer. We sometimes see him in the cockpit, looking lost. There’s nowhere for him to sit. The 737 never had flight engineers, it was all done by monitor. When I have seen him his skin he has had a translucent grey hue, as if from in a black-and-white film. Sometimes people meet him gliding along the passenger isle or 'working' on some mechanism on the plane. I always thought ghosts must be bored having to go through the same motions over and over, a job you can never leave. He's harmless though he can upset the passengers.

The first time I heard about him was when passenger, a puffy, white South African tried to get his attention. He had already complained about the food and about his head-rest and the quality of the film selection. The Engineer ignored him. This did not go down well. I was a junior at the time, just qualified. While the pilot got on with important things like flying the plane I was pulled out to soothe this poor man's feelings. Afterwards the Senior Flight Attendant, whose name was Noelle, apologised:

"I'm sorry" she said. "I ran out of things to say. He wouldn't stop. I could hardly tell him it was the Engineer."

"God, you are new" she said and patted me on the cheek, a little patronising, but I didn’t mind so much. I’m sure I wasn’t the only crew member to have a slight crush on her.

So the Engineer went through the motions on this particular plane. No one knew why he was there, what he wanted, or even who he was, though there were some good guesses. I remember talking to an aviation enthusiast called Roger, who investigated the Engineer. He took eyewitness descriptions of the ghost and made a photo-fit. I know because he was hanging around Heathrow Airport lounge trying to talk to company flight crew. He showed me the photo-fit and a picture of a young man called George Blake, who used to be a flight engineer. He went apparently missing West Berlin shortly before the wall went up, though Roger didn’t say whether it was murder or misadventure. Mr Blake looked quite like sketch of the Engineer though. Roger was certain; goodness knows how he got the photo. I wasn’t so sure.

The Engineer was bound to the plane and to his work, a minor inconvenience and an interesting tale. But something changed on the way into Brandenburg Airport. We were about ten minutes from arriving in the stack. I was poring over the dashboard, getting ready to resume control of the plane when a hand appeared over my shoulder. I jumped then turned in my seat. It was the Engineer, stood over me. He had a half-blank, half-anxious expression, looking back and forth and pointing intently at something on the dashboard. There was a sudden exclamation from the cabin door:

“Oh my God…!” My co-pilot, Darius, had just come back from the toilet. “What…?” He was flabbergasted, shocked, almost as blanched as the Engineer. He was new and clearly had no idea. I said:

“Wait…” which he did. The Engineer was glancing back and forth. He wanted to tell me something. Eventually he managed to slowly mouth:

“Look…” I wasn’t sure if I heard him or not. I realised he was pointing to the internal pressure dial. It seemed fine though the indicator was flickering. Something in me took this seriously. I said:

“What should we do…?” The Engineer pointed down. “OK…” I then got in touch with Traffic Control and sent the plane down several thousand feet. I knew I’d done enough when the Engineer smiled and disappeared.

It turned out there were three stress fractures in in hull, only small ones, the onboard computer missed them all and any breaks can be dangerous. The plane was grounded for repair. A few years later the 737 was decommissioned and, as far as I know, it seems the Engineer has been permanently retired.