All the Way Down 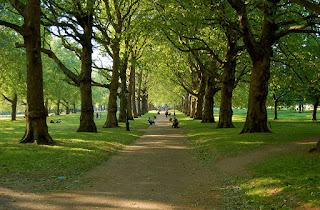 Stephen stepped up from Green Park tube into the light. It was another fine morning. 8am exactly. As per his routine Stephen cut away from the crowds, people hurrying along to work, and the leafleters and newspaper barkers already at work. He stood at the park gates and felt a gentle, happy swell. Unlike them he had time, precious time. He looked at his watch again, 8:02am, and set off.

One of the major non-outlined benefits of being a civil servant was you could set your own time. Stephen needed time. He needed time for space. Normally he was dogged, every second of the day. People:

1) emailed him
2) texted him
3) phoned him, quite often out of hours

always wanting things outcomed, authorised or deferred. That was what he was paid for. Stephen was a rising star. But his time was filling up, meeting after meeting. Not that he didn't make them work for his wisdom.

Every morning, prior to work, Stephen self-tabled to go jogging. He would justify it to anyone who asked by saying it kept him fit but he'd seen the pollution charts and Stephen knew that exercise in central London was a mixed blessing. He went jogging though because it allowed him to look inward. He was an outgoing man with an outgoing job. He had to be many things to many people, responsibilties he couldn't turn his back on. His time was quantised, down to five minute slots, and given away. There was so little left it made him query what was at the centre of it all, who was he, what bit of him was him?

The more he looked though the stranger it got. He cleared his mental chart by jogging and yet what came to the surface was work stuff, the ticklish problems, ones that, being honest, he enjoyed. Things like:

see this week's case-conferences (Monday, Wednesday and Friday). Perhaps this was him, perhaps it went all the way down like a fractal, a never-ending pattern. But perhaps he was hiding something from himself, something he didn't want to see or acknowledge. Why would he do something like that though? He found these questions fascinating. Stephen tried applying some adjectives to how he felt thinking this. His non-definitive list included:

but he wasn't sure about the last one. He didn't know what it meant.

It took, how long did it take, Stephen looked again, 8:04am, it took at least two minutes for his mind to settle, and it had settled on the problem how to develop an equation for the inverse ratio of efficiency. It was really just another variation on the old problem of administration: how to quantify everything? In fact Stephen was due at an inter-departmental meeting at 11:30am to discuss this very issue.

As he plodded along, down the hill, through the gap between the field of stochastic death chairs (death chairs?) deckchairs and St James's Palace, he pondered the matter. The fact the... the park was quiet, very few people around. The fact of further efficiency savings meant of course that departments would find it harder to meet their statutory requirements with regards to the services they provided. Onto a path and right toward the Canada Memorial. In the long run it was just a... matter of changing those requirements, but how and when... and in what way? Lots of public services... were difficult to measure, health, education... sanitation and... Canada, culture and so on were... Were those footsteps?

Stephen listened as he jogged, the patter of feet on the path, there was someone behind him. He stopped for a second, falling into a crouch, have a breather, let them pass... but they didn't. It took a second to register. Without looking Stephen mopped his brow, it was warm, another fine morning, then glanced at his watch, 8.07am, shook his head and got back up again. The fact of further efficiency savings would... He listened again, there were the footsteps again, echoing his. Stephen glanced over his shoulder briefly. There was someone running behind him, about ten yards or so. He didn't catch the man's face, as they were looking away. He assumed it was a man... It was OK, not to worry, he was just jogging too, another jogger, dressed like him doing exactly what he was doing, that's all.

On, past the Canada Memorial. This was getting... the footsteps were still there. Stephen went across the grass toward the path parallel to Constitution Hill. He listened. The steps had followed him. The jogger had followed him. What to...? No. Stop.

Stephen stopped again. Silence, except for the rustle of wind in the trees, no sound, except for the purr of engines on the road, nothing, except the chatter of a group of school children across the street. Stephen turned around, carefully. No footsteps. Yes, there was the Person, the Jogger. It was a man, he was dressed like him, his height and hair colour too and perhaps even his age. He seemed oddly familiar. He had his back to Stephen though. Did he know him? What was this, a coincidence? Stephen turned back again. Facing away from the Man he took two large, deliberate strides then turned quickly on his heel. Snap! The Man, the Follower had done exactly the same. He was following Stephen. A jolt, Stephen took off, briskly, then in a ramping swell of panic he began to run.

Remember agent training... what to do if you're... Stephen looked around... the park was quiet... remember what to do if you're... he was alone... not alone... Stephen glanced back, quick as a flash. He was still being followed and at the same distance. He didn't see the Man's face. Zigzagging in waves through the trees... Stephen was panicking... He couldn't remember what to do it was so long since... He tried to sprint but the effort was beginning to tell and he was still being followed by... he couldn't quite... Get somewhere, yes, it came to him, get somewhere people could see you, that was it... or was it a false memory...? It made sense though. Had he done this before...? It was so long...

Stephen made for the Wellington Monument, still being followed. The lights on the crossing were green, good... there were people there too but, um... no one seemed to notice. No one could see he was being followed by... he couldn't quite see but he could hear... Stephen looked back again, longer this time. The Man was looking away, definitely looking away. Another surge of panic... Over the next set of traffic lights, they were red this time. Stephen had to dodge the traffic with nimble, adrenalised steps. He was running on... Lucky, but he was still being followed by... Through the garden, onto Rotten Row, out again onto Knightsbridge but he could still hear the footsteps just behind him... he was slowing now... he slowed... Somewhere around the French embassy he slowed... heavy breaths... aching legs... his footfall slowed... no one seemed to notice he was being followed by... His pursuer's footsteps slowed too... He slowed until he couldn't take it any more... Stephen... stopped...

Stephen stopped and crouched in a way now pursuant to his actual condition of oxygen debt through prolonged exertion and stress. Even in his present state Stephen was able to ascertain that pedestrians, such as there were any, still did not appreciably notice anything untoward in this scenario. He checked his watch, as was habitual (habitual?), and saw it was 8:23am. It took a further few seconds Stephen to also register that that despite having stopped he was neither apprehended nor hailed by his unknown pursuer.

He stood up again, perspiring and still breathing heavily and looked, confirming to himself that the Pursuer had indeed stopped. They were further along Knightsbridge, just past the Hyde Park Barracks. The Man was standing still, ten yards away, looking back down the road and facing away from Stephen once more, the same pose as before.

After feeling a volley of emotions Stephen was now uncertain, almost curious as to what was going on. He had a feeling. Had this happened before...? Stephen raised a hand to point and the Man did likewise. Shock reverberated through him, it evanesced, yes he used that word, thinking it in earnest, it evanesced into an even more potent fascination. Stephen took a step forward and the Erstwhile Follower did the same. Another step, another reciprocation. What was going on? Stephen was no longer afraid, he wanted to know. Step, step, step, stride; people were still passing by, unaware, but Stephen was now no longer afraid.

“Hey” he shouted. “Hey...! You...!” But, for the first time, this did not draw a response, there was no response. Fascination was now falling away, curdling into anger. Stephen began to run, then sprint again, but he could not reach the Man. They ran back down the road toward the junction with Sloane Street. Stephen was now propelled by something like rage, his tiredness fell away, faster, but still he could not reach the Man. They crossed the junction, the lights seemed to turn in the right order. People, now finally catching on, seemed to part for the two men running, even if he wasn't catching... All the way down Sloane Street, they kept running. A new flood of emotions washed through Stephen, quickly, tossed around and barely registering but they were there... grief, trepidation, joy, frustration, anguish, pseudorecursion... Left at the round-a-bout, toward Belgravia. Still in hot pursuit, he wasn't running in anger any more. He wasn't sure what he was running on, the ground felt frictionless. Stephen called out again:

“Stop...!” Another turn now, down terraced streets, compressed mansions with elongated doors and frictionless steps, places Stephen did not recognise, unfamiliar... Faster, yet faster, yet, they were going too quickly, everything was going too quickly... “Stop...! Please...! What...?” Yes, Stephen realised something was going on. No matter how hard he tried he could not reach the Man. Something was going on, something strange... “Please” he said. “Please stop. I know... I want to know... I...” He felt about five years old, pleading with the Man. A left, a right, a left again: “PLEASE... Is this... some... can... what...?” Another turn. The pair reached an alleyway a yawning dead end, a brick wall, a strange place that perhaps shouldn't have been there, yet, there it was... There they were. Both Stephen and the Man came to a halt. “Please...” said Stephen, breathing hard, “I want to know... Is this a sign...? What's going on...?”

“Turn around” said the Man. He spoke slowly. “Twenty-to-nine, turn around and you will see.” The Man had a familiar voice. Stephen did as he was told, he turned and saw all the way down then back up as he stepped up from Green Park tube into the light. It was another fine morning. 8am exactly. As per his routine, Stephen cut away from the crowds, people hurrying along to work, and the leafleters and newspaper barkers already at work. Stephen stood at the park gates and felt a gentle, happy swell. Unlike them he had time. He looked at his watch again, 8:02am, and set off.
Posted by Adam Marks at 08:40 No comments: 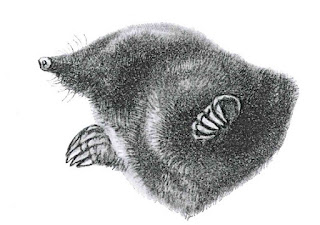 Here I am with a story of mine (and my ugly face at the end of it) in Storgy today. I actually really like this story and am very glad it's found a proper home. Of course this is usually when I spot a small but howling mistake but such is life.

Enjoy Allotment Story, because it's bloody brilliant.
Posted by Adam Marks at 03:09 No comments: