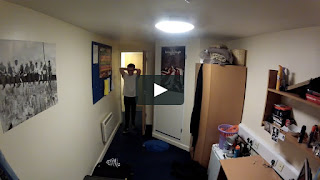 To begin with no one paid it much attention, literally, for the first three weeks the only views or followers the channel got was bots. Why would anyone pay much attention to a direct-to-camera diary hosted by an individual, a boy in his late-teens1 called 11B-X-1371, especially when the initial videos were between two to seven minutes long and mostly referenced pop culture or personal minutiae?
The first video of interest was posted on the 18th of January 2017. The video featured a prank2 derivative of the ‘Big Stranger Rodeo’ where the Individual jumped on a stranger’s back, in this case a boy of similar age in an unknown hallway. It was the first video that was not delivered direct to a fixed camera, the first to be recorded by someone other than the Individual (though this person has not been identified) and the first in the manner that would come to define the channel, which was renamed “Fear No Darkness.”
The immediate result of the video was am uptick in views, more than 100 in 24 hours after posting. This led to the Individual in the following video putting out a call for suggestions for more ‘pranks’3. The video following was posted on the 20th of January 2017, showing the Individual attempting to steal a ball from an informal game of basketball4 (also derivative5). In subsequent weeks the Individual posted videos of himself:


The last episode was posted on the 7th of February 2017 and got 1,000 unique views in 48 hours. The channel was logged at GCHO three days later and a cursory investigation conducted, indicating that the channel and user were both operating behind multiple proxies, with the ultimate location being a site in Belize. The site then placed under continual surveillance.
By the end of February the site’s output was dedicated almost entirely to self-described pranks. The pranks also changed in content and tone. The Individual (by this point known to followers/viewers as “Eleven”) was filmed:


The channel was taken down after the last video, dated the 3rd of March, two days later6. An APB was placed though the Individual was impossible to locate7. The Individual reappeared on March the 24th 2017 on a largely self-constructed site called “Where is the Rider?” The Individual has been subject to numerous denials of service since but for a period was able to return to online broadcasting. The videos made by “Eleven…” became progressively more racist, violent and/or self-destructive, which in turn encouraged more and more outlandish suggestions from viewers. This culminated on the 23rd of May 2017 when the Individual posted two videos in twelve hours, in the first he appeared to amputate his left hand, followed by one where the hand reappeared, the Individual apparently unaffected, recounted news from that day to prove the date and time. There were a combined total of 95,000 individual views for the videos on that day alone8. The case was handed to a specialist unit, called the Special and Metaphysical Crime Squad. A D-Notice was imposed on the media and denial of service re-established.
After this point no site directly hosted videos of the Individual however a train of videos emerged on a number of forums9 and formats, shared widely10. Known examples include the Individual:


As before the Individual, AKA “Eleven”, would reappear unharmed however no such person was identified or apprehended in real life. By July 2017 however, after reverse engineering the share-route the videos took, the source of the videos was eventually narrowed down to a university campus in Central London.
Though a search of the campus, students and staff did not turn up an “Eleven…” a scan of the IT mainframe found a rogue subroutine, called 11B-X-1371, that had been entered into the university’s intranet on the 1st of January. No one knows who entered it but the programme was designed to create the ultimate YouTube star, a completely fictional entity based on a composite of internet celebrities. While the phenomenon itself has been successfully contained online there has been a proliferation of actually existing devotees of 11B-X-1371, fans committed to bigotry, violence and self-abuse until the ‘Mad Rider’ returns. So far there have been twenty-three known casualties. The case continues.

1 Slim-to-medium build, short sandy hair, blue eyes, the Individual speaks with a mostly non-regional English accent.
2 It was listed as a ‘prank’ in the video description.
3 To be left in the comment section. The Individual specifically requested viewers not “DM” him.
4 The court was later found to be just off the Camden High Road, between Camden and Holloway.
5 And not one of the archived suggestions left in the comment box.
6 In which time it accrued over 4,000 unique views.
7 The suggestion for the staple video came from a site user known as “Tokyo Fist.” The user was put under surveillance but found to have no connection to the Individual.
8 The prank was suggested by a viewer called “Jimmy Vespa” who also apparently won an unknown prize. The Individual said “this time you can DM me.”
9 Including a members-only sub-reddit called “The Mad Rider…” a later nickname for the Individual.


10 An average of about two hundred thousand shares for each video.
Posted by Adam Marks at 10:15